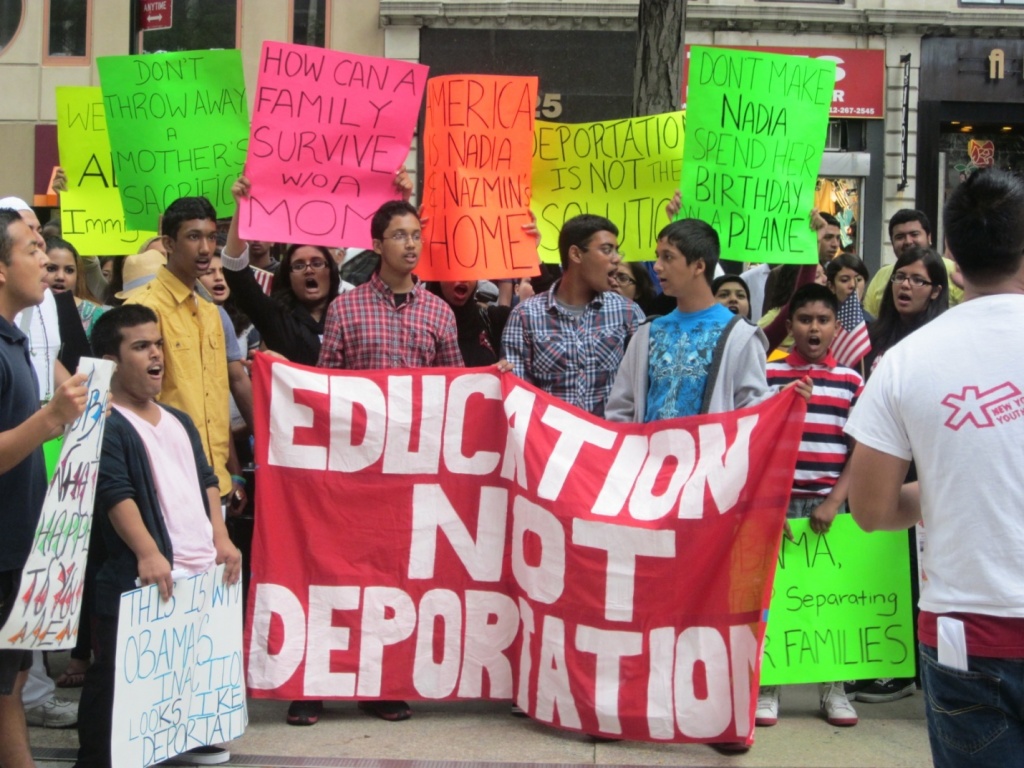 After January’s raids that tore teens from their families and plucked them off buses on their way to school, the Department of Homeland Security (DHS) is about to embark on a renewed quest to arrest and deport Central Americans who applied for refugee status in the United States in the summer of 2014.  According to sources reported by Reuters on 12 May 2016  and confirmed by DHS a day later, the agency is sending Immigration and Customs Enforcement (ICE) agents out on a second wave of raids against immigrants, this time with the specific aim of apprehending and imprisoning Central American women and their children, or “family units”, and unaccompanied minors.

An article by Julia Edwards published by Reuters on Thursday referred to internal papers that were revealed to the news agency concerning the upcoming operation.

“Immigration and Customs Enforcement (ICE) has now told field offices nationwide to launch a 30-day ‘surge’ of arrests focused on mothers and children who have already been told to leave the United States, the document seen by Reuters said. The operation would also cover minors who have entered the country without a guardian and since turned 18 years of age, the document said. Two sources confirmed the details of the plan.”

Despite assurances by DHS Secretary Jeh Johnson that “we will offer vulnerable populations in Central America an alternate and legal path to safety in the United States,” the impending actions seem to be anything but.

Marielena Hincapié, executive director of the National Immigration Law Center, released the following statement in response to the DHS announcement:

“These military-style raids against mothers and children fleeing violence are reprehensible…. The federal government’s failure to address the violent conditions that are causing women and children to flee in the first place, mean that these raids are a complete and utter policy failure.”

While January’s arrests were carried out in only three states (Georgia, North Carolina and Texas), the new raids will take place throughout the country. Though DHS avows it is only targeting dangerous individuals who have already been deemed deportable by a court of law, byzantine courts, nebulous immigration laws, lack of access to counsel, and pressure from bed quotas and private prison corporations such as GEO and CCA are placing mostly innocent and deserving people, including children, in ICE’s crosshairs.

According to the government’s own findings, as reported by the United States Citizenship and Immigration Service (USCIS), the agency determined that in 2015, the vast majority of asylum petitions, 88%, were found to be based on credible and reasonable fear, even including statistical juggling such as giving equal weight to a single closed case from Ethiopia. The percentage reached 100% for most countries in the second quarter of the year.

“While Johnson insisted that his department is focusing both detention and deportation resources on high-risk immigrants with criminal backgrounds, the evidence suggests otherwise. A National Immigration Council report found that, ‘between 2009 and 2011, over half of all immigrant detainees had no criminal records. Of those with any criminal history, nearly 20 percent were merely for traffic offenses.’

“An Immigration Policy Council report out this week found that ICE mostly deported immigrants who posed ‘a threat to no one.’ In fact, only one in five deportees qualified for a ‘Level 1’ priority, a category that once encompassed crimes like murder and federal drug trafficking, but now has broadened out to include ‘theft, filing a false tax return, and failing to appear in court.’ Other immigrants were deported for much less.”

Community activists AlertaMigratoriaNC (NC Migrant Alert) have been working hard to spread the word about six teens who were arrested in January raids in North Carolina. Of the #NC6, three have already been deported, while Yefri, Pedro and Wildin languish in detention. In an unprecedented move, AlertaMigratoriaNC has published a flyer in response to the announcement about the new raids, delineating what to do if you are in a targeted group. Their message: MOVE!

“If you have a deportation order and live at the same address as when you arrived and your application began, you must move immediately as immigration will go to the address that was provided.”

Even though he was in the company of his father who has immigration status, Pedro Salmerón was picked up by ICE on January 26 as the two were on their way to the father’s job site. Pedro was a 10th grader but since he had already turned 18, his family thought it best to avoid school after learning about the raids. Speaking to reporters for The Charlotte Observer, family members recounted how a cousin had been castrated and decapitated in El Salvador, prompting Pedro’s departure to join his mother and father in the U.S. El Salvador has the world’s highest homicide rate, and the Peace Corps cited this fact when it decided to pull out from the country this year. Its violence is gang-related and young boys and girls like Pedro are its most likely victims.

But none of that swayed ICE. “My son was taken away with his hands and feet tied. We are not criminals,” Pedro’s mother says. “This has broken my heart to see him like this.”

Women and small children without deportation orders are also being treated like criminals and arrested in aggressive and inhumane fashion. A report by the Southern Poverty Law Center (SPLC) and the Georgia Latino Alliance for Human Rights centers on women and children in the Atlanta area who had not been determined to be deportable, who were being processed by the courts, who had followed all the steps and attended all the appointments and were known to DHS to the extent that they were all wearing ankle monitors.

Yet they were rounded up by ICE agents, often in the early hours of the morning, without regard for their dignity or their basic human rights. Account after account in the report describes instances where women and small children were dragged out of bed, refused access to counsel or allowed to contact friends or family members. Children were not permitted to take any belongings or even change out of their pajamas. Inexplicably, in case after case, ICE agents used a photo of an African American man to somehow menace the women and children. From the report:

“ ‘We were treated like criminals. I don’t understand why. I had gone to my ICE supervision appointments, and even had an appointment scheduled in a few days,’ said Ana Lizeth, who is still detained.